Panic on the Streets of London

Panic on the Streets of London

We want to make a piece for the streets of London. A game. A journey. A show. Another way of looking at the city.

We want it to be about disasters. About the aftermath. About ghost cities. About the ghost of this particular city.

London seems to exist in permanent state of waiting for something bad to happen. It holds itself in the brace position, muscles tense, anticipating the next catastrophe. The air always has the faintest tang of anxiety to it.

I cycle down streets and this taste imbues everything with chaos. Ambulances, arguments, the muffled banging of rubbish falling down a plastic shoot. I constantly expect to be stumbling into a disaster.

I’m sure that’s why the city seems to deal so well with tragedy. It’s always expecting it.

We want people to imagine this disaster. Imagine themselves as survivors, wandering dazed through the empty streets. We want people to walk through the overcrowded city, along congested roads through bustling hoards of people, past Starbucks and McDonalds, high rise offices, busy bars and expensive boutiques seeing all this as nothing more than a past echo. A place they no longer inhabit. Themselves the last survivors. The designated mourners for a society that is no longer there.

BBC Transcript to be used in the wake of nuclear attack:

This is the Wartime Broadcasting Service. This country has been attacked with nuclear weapons. Communications have been severely disrupted, and the number of casualties and the extent of the damage are not yet known. We shall bring you further information as soon as possible. Meanwhile, stay tuned to this wavelength, stay calm and stay in your own homes.

Remember there is nothing to be gained by trying to get away. By leaving your homes you could be exposing yourselves to greater danger.

If you leave, you may find yourself without food, without water, without accommodation and without protection. Radioactive fall-out, which follows a nuclear explosion, is many times more dangerous if you are directly exposed to it in the open. Roofs and walls offer substantial protection. The safest place is indoors.

It’s interesting that this script was created in the early 70s , the heyday of the big budget, world-conquering disaster movie. The script was discussed from 1973 through to 1975. In 1974 the Towering Inferno was the biggest grossing film at the US Box Office, Earthquake was the third biggest. As would become all too cruelly apparent in 2001, these movies give us a way of talking about this inconceivable fear, they give it a structure and a narrative, heroes and villains. The movies gave us our only means of thinking about tragedy, so inevitably when it happens, it feels just like a movie.

The disaster movie is for me the ultimate 20th century genre. A century that began with one ultimate tremor and ended with another. Absurd, inconceivable moments of interruption, physically and psychologically reorganising the world beneath our feet while we attempt to retain our balance.

For a genre that dominated Hollywood in the early 70s and spawned several of the most successful American movies of all time (Towering Inferno (1974), Earthquake (1974), Airport (1970), The Poseidon Adventure (1972), arguable you could also add 1978’s Dawn of the Dead to that list as well), they are generally pretty brutally bleak. From the title and the cataclysmic images that adorn the lurid posters the disaster is foregrounded. We watch the movie not alongside these characters but from above, gazing down on them, or perhaps backwards through time, powerless to stop the impending catastrophe which we already know is about to engulf them. 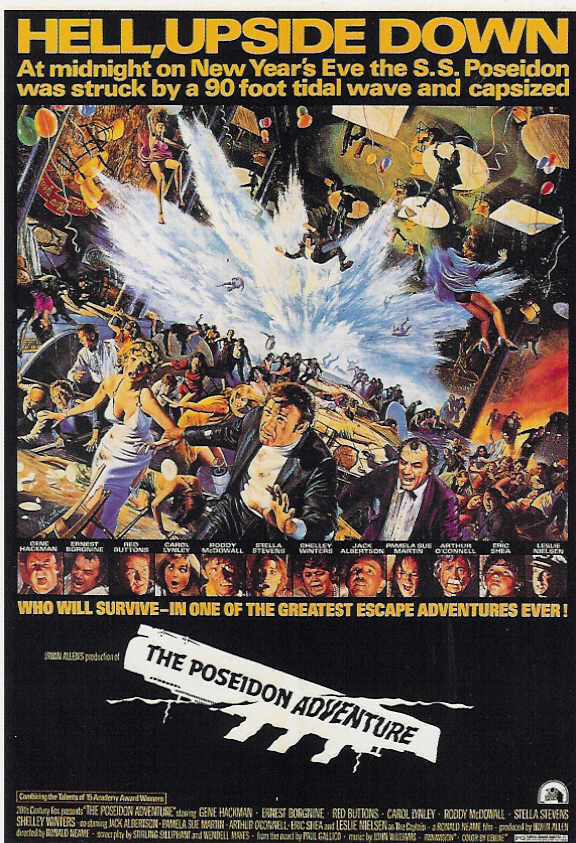 There’s something very Brechtian about the opening scenes of these movies. We are entirely estranged from these characters. Frozen in the mundane trivialities of their everyday lives, any sense of involvement we might have otherwise felt with them and their romances and squabbles and hopes and fears fatally undermined by the enormous fucking Earthquake we know is about to smash everything to pieces. We know in approximately 30 minutes whether they are cheating on their wife or fighting to secure that big money deal or just walking along they are about to be hit by the most expensive special-effects-laden moment of interruption you can imagine, leaving them all scurrying about like ants just to survive. What would watching any episode of Friends have been like with the knowledge that one (or more) of them would die in an unimaginable act of terrorism at the beginning of series 8?

Sam Royce – Wealthy businessman with a heart of gold.

We want to make a disaster movie out of the streets of London. The streets will be a become a liminal space, at once the before and after – the real people like shadows burnt into walls, ghosts haunting a landscape of imagined desolation. Yet all this is softened, made strange even playful, because it feels just like a movie. There will be stories to tell, characters to play, heroes and villains.

The disaster will never be stated (terrorism, flooding, war, flesh eating zombies, alien invasion). Maybe the audience will need to invent their own disaster. Maybe it will just be all these things. What is important is this relationship with the streets, with strangers, with the city, with each other: hauntingly local and epically (cheesily) cinematic, before disaster and after it, real and imagined, told and invented. Hopefully we’ll forge a space for people to renegotiate their relationship with this anxious city – to love it more, to fear it more, to pity it more, to laugh at it more, to play in it more, to make the landscape of the city a mirror of themselves.

This is, of course, at this stage monumentally theoretically – a mess of hopes and ideas. Any thoughts or contributions (or favourite obscure disaster movies) you have are massively appreciated.

Previous Post "He was a man who lived the life he wanted."
Next Post Economics for Beginners Part III: A non-exhaustive list of things to begin hoarding in preparation for the oncoming Depression
Back to Posts